in order to measure medicine concentrations!

We have to develop our own assays to measure animals’ medicine concentrations in blood because no one else is doing this!

When we started to develop assays to measure medicines in koala blood it was not immediately obvious to us that koala blood was going to be more complicated to assay than that from other species. But it has been proven to be so!

We use a technique called liquid chromatography (LC). When we get the blood sample from the animal, we spin it down and take off the plasma, which is used for the medicine analysis. We don’t use the red blood cells. We then process the plasma to remove unnecessary proteins. The sample is then picked up by a mobile phase which comprises of a mixture of organic substances and water. The sample and mobile phase then go through a column together. Utilising different chemical properties between in the medicine in the sample, mobile phase and the column, the medicine will  be represented as a peak on the machine ‘read- out’ known as a chromatogram, at a particular time. The area under the peak or the peak height allows us to work out the concentration of the medicine in the blood.

We have found that the koala plasma without any medicine in it, frequently interferes with finding the medicine peak. We think it is because the koala has so many organic molecules in the blood. We think these organic molecules are due to the fact that their diet of Eucalyptus leaves is high in terpenoids and phenolics and other organic substances that overlap with the medicine peaks. Furthermore we see differences in these interferences depending on the location of the koalas. We are supplied with blood from the koalas at Taronga Zoo, Port Macquarie Koala Hospital, Australia Zoo and Currumbin Wildlife Sanctuary and we see differences in the peak patterns in non-medicated koala blood from all these locations. We do not see the amount of peaks nor differences in peaks in the same species but living at different locations in any other species to date. We think that the difference in patterns from koala blood obtained from different locations may be due to different mixes of Eucalyptus species leaves that the koalas eat at each location.

As I say we didn’t recognise this ‘interference’ at first; but the more medicines we started to assay, the more obvious this problem became to us. It is very important if we want to find small concentrations of medicines. So we are now very aware of the problem and a lot of time is not spent ensuring we do our best that we manipulate the LC conditions to ensure the endogenous substances in koala blood to not interfere with detecting the medicine peak. 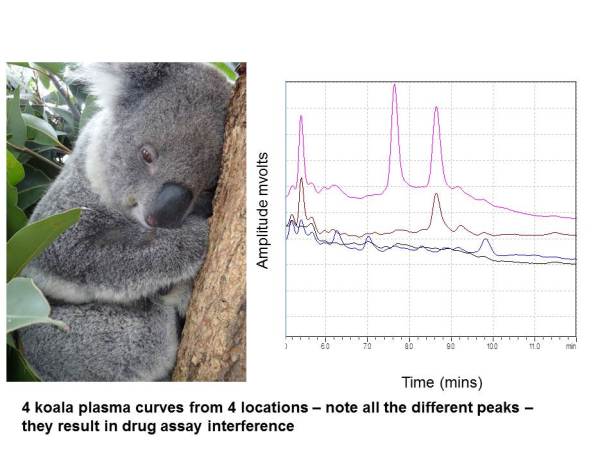 The pink trace is from plasma (contains no medicines) from koalas from Australia Zoo, Beerwah, Qld;

The brown trace is from the Koala Hospital at Port Macquarie. NSW

The black trace is from the koalas from Taronga Zoo, Mosman, NSW

All three traces have peaks that occur at different times and may well overlap with a medicine peak.

If using liquid chromatography assays to detect medicine concentrations in koala plasma it is important to know that the plasma can be a significant problem with the assay. If you want a sensitive assay, that it, the assay can detect low concentrations then it is important to see if the plasma has peaks that will interfere with that of the medicine and then work out ways to change the position of the medicine and interfering substance.